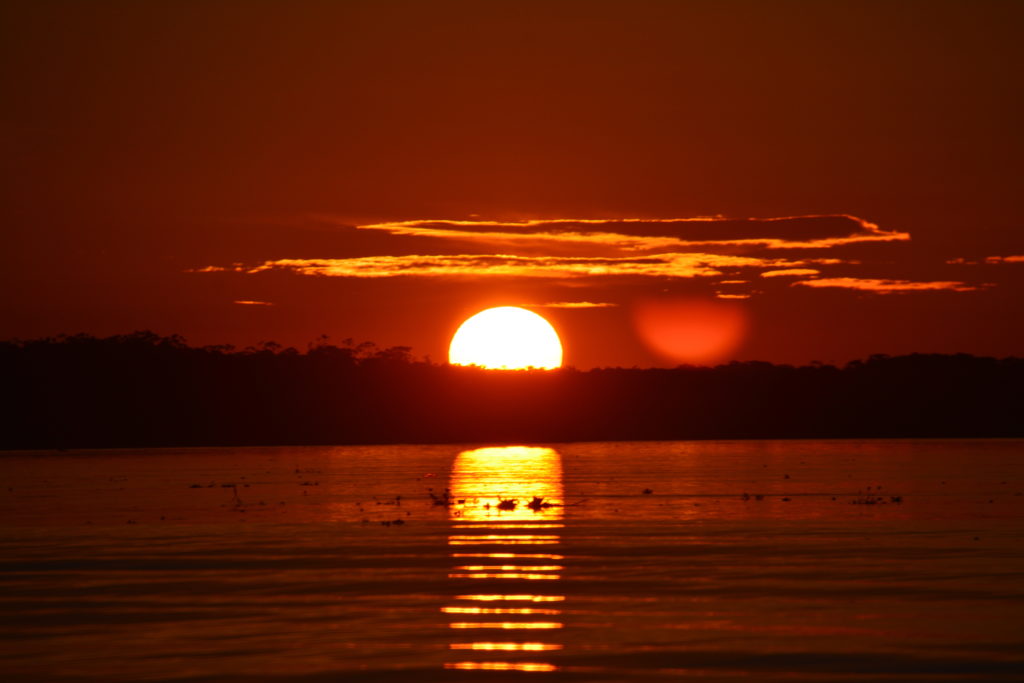 What do you think of when I say the word “river?” Do you think of a wild rushing current whisking you down rapids in a raft or do you get a peaceful, easy feeling drifting with the current listening to the sound of distant birds? Now think specifically about the Amazon River. What comes to mind – jungles, piranhas, and crocodiles amid a flowing mainstream with lots of tributaries? I bet you didn’t think about worship.

I recently returned from an exotic trip with my younger sister Nancy. We called it a retirement trip to celebrate both of our retirements. Nancy picked Machu Picchu, Peru as our anticipated destination. We found a tour that included not only Machu Picchu but an Amazon River cruise. While I was delighted with Machu Picchu, I was a little more excited about cruising down the Amazon River in a luxury riverboat. Something about the Amazon River mesmerizes me. To know there are still tribes along the river that are, well, tribal, intrigues the heck out of me but that wasn’t the mystique I felt since I knew I wouldn’t be seeking out any tribes. The whole idea of just being on the Amazon River, experiencing it, connecting with the area, feeling the water in my hands, seeing the vegetation and animal life, hearing nature come alive, and visiting an Amazon village – that was a big allure for me.

We did all those things and more. Nancy and I kayaked on the Amazon (until we sank, but that’s another story.) We also swam, dipping into the mighty still waters. This was a major highlight for me. I eagerly dived off the side of the skiff plunging into the cool and exhilarating dark water as I consciously felt it cover me from head to toe as if I had shimmied into a full wet suit. I came to the surface smiling. About eight of us swam and enjoyed floating around with our noodles that had been provided. I felt like a giddy teenager frolicking in the refreshing water much like the pink dolphins we had seen. All fears were waylaid by our tour guide who said there would be no piranhas eating our toes, no anaconda lurking from the depths to come squeeze us to death, and no crocodiles swimming up from behind searching for a human snack.

That morning we were treated to a wonderful breakfast on the water in our skiff. We had boarded early and sauntered around the area looking for birds and mammals along the river’s edge. We eventually found a shady place to tie to a tree; breakfast was prepared and served with camu camu juice. Yum. Following breakfast, we were given fishing poles. No one caught anything but now we can say we’ve been fishing in the Amazon River. Several early mornings we had the joy of birdwatching. We spied a variety of birds and mammals including sloths, monkeys, and iguanas. I particularly liked the “Jesus Christ” birds that walked on water (or actually the vegetation on the water.)

I savored the early morning rides in the quiet of the day but the evening rides were equally relishing with the distant setting sun behind the tree line of the flatted forest. The sky was subdued until the last moment when the sun peered through the clouds for its last blazing goodbye. It was a moment of worshipful solitude for me and my temple was the Amazon River. God was there but I knew He was also in Birmingham, Alabama when I sat in my meditation chair just two weeks earlier. I loved that thought. I loved the moment. I loved how God could create such a place in Peru, South America with such simplicity yet with such power and steady perseverance. I felt small yet important and remembered.

Not until I was home did I realize one of the reasons why I was so intrigued with the Amazon River. I believe in some ways the river personifies the diverse attributes of God. How so? First, the peaceful and calm nature of the river invites solitude, the worshipful kind. I had not expected the river to be so calm but in the midst of that calm I could sense majestic power. Our naturalist took us to one place and said he had been there four days earlier. The vegetation was so thick it blocked the entranceway. There was still floating vegetation but it was much further down. The naturalist said it would soon be pushed away by the steady current. The power, sustenance, and joy the river brings were also evident in the flooded villages we saw. Children were seen playing on the water’s edge; women were washing clothes; a man in his rowboat was cleaning fish. We had already witnessed the teeming life along the river. Twists and turns in the water seemed to demonstrate God’s willingness to adapt and meet us where we are, to bend a listening ear, and to reach out with outstretched arms to draw us unto Himself. The glorious sunsets could not be overlooked providing the Amazon a spiritual voice.

The simple beauty of the Amazon Basin had a graceful appeal, too, wooing me into its presence. I especially enjoyed the mystery of the Basin’s jungle where dangerous small and slithering creatures with poisonous bites could be found, interesting trees with protruding needles, magnificent trees of old that have stood the test of time, and an elusive aura of respect causing us to have to wear high rubber boots. There was also a magical element as an iridescent blue huge butterfly, and I mean huge, came flitting up the path looking for a mate.

The river carries with it stories of healing, folklore, legends, and survival. A silent sovereignty pervades across the nations in which it flows much like how God’s sovereignty over His creation. Rivers in the Bible don’t sound much different than rivers of today to me. Scriptures describe the character of rivers through destruction (Nahum 2:6), delight (Ps 36:8), joy (Ps 46:4), healing (II Kings 5:10), life (Ezk 47:9), worship (Ezra 8:21), safety (Ex 2:5), quenching (Ps 105:41), peace (Is 48:18), swimming, (Ezk 47:5), baptism (Matt 3:6), and refreshment (II Sam 16:14). I was blessed by my time on the Amazon River and shall fondly remember my few days spent with its Creator. “The river of God has plenty of water; it provides a bountiful harvest of grain, for you have ordered it so.” (Psalm 65:9b)