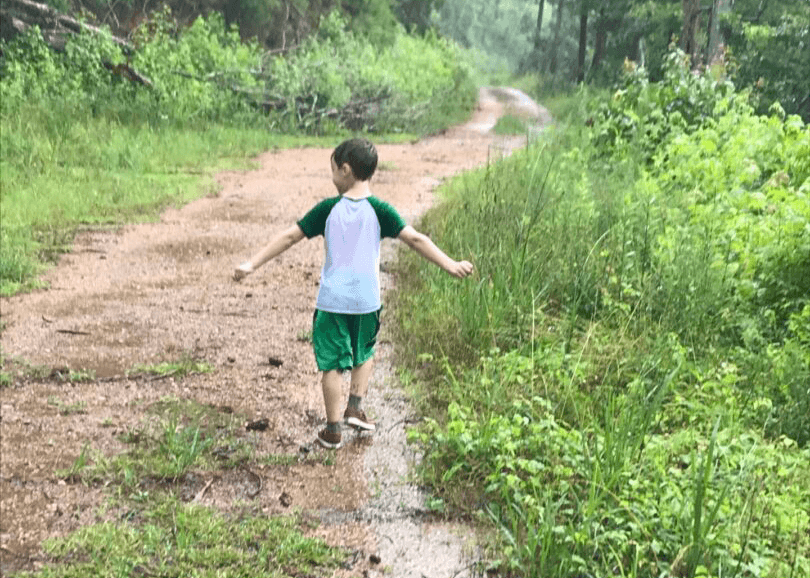 Dancing In The Rain

All eyes turned towards me as we sat around the table eating birthday cake and ice cream. Lucas innocently asked, “Aunty Karen, when can I come spend the night with you?”

I gulped down my Coca-Cola and politely replied, “Soon. Very soon.”
As I thought more about when my 6-year-old great nephew could come, I decided a good time might be when it was just me at home. Stephanie and I set up for the Friday night Parky would be out of town on a church construction trip. It just seemed easier.

My creative juices kicked in as I began to think of activities Lucas and I could do. I consulted with a church friend who had grandkids. She suggested I use the church playground rather than going to a park. That sounded like a good plan. I contacted another friend about going to a sheep farm. It sounded fun but too far away. I was excited to learn about a demonstration farm practically at my back door. It had goats, sheep, chickens, a horse, and a donkey. Another definite activity was the paint kit I had ordered some time back. Hmmm . . . now what about food?

I have to confess after all my preparation for just two days and one night, I don’t know how mothers, dads, and grandparents do it day after day! Dizzy from all the planning, I was determined that Disney movies and cartoons were not going to be my go-to. I made it my unspoken goal not to turn on the tv.

The much anticipated day came. I drove to the McWane Center in downtown Birmingham to pick up Lucas from Space Camp. He was excited to see me as he grabbed his backpack and trusted stuffed bunny. I strapped him in the car seat that had been installed a few days earlier by his dad. Whew! I passed the car seat test. I never realized how complicated those things were. Another rah-rah for parents.

Lucas took the fruit gummies I gave him as a snack and off we went. I felt a weighted responsibility knowing that my car carried a young child. Question after question came from the back seat mixed with silly comments and laughter. With only a few miles into our overnight adventure, I wondered if I was up to it. Maybe God had reasons not to make me a parent!

Our first stop was the church. We headed straight for the playground and then promptly detoured for a pit stop. I took advantage of the location and decided to introduce Lucas to the organ. As our church organist, I was comfortable letting him sit on the bench and play some notes. He loved playing the pedals and pulling stops. I felt like a proud aunt. After our mock organ lesson, it was back to the playground. This time I was told – not asked – to be the dump truck driver. Oh boy!

Once home, I decided to get a head start on our ceramic sun paint project. I had set up a “studio” in the kitchen. Lucas and I discussed our paint design as we dipped our brushes into the paint. We’re going much faster than expected. We better slow this buggy down. I seized the moment to interject something spiritual into our evening by quoting Psalms 113:3. “From the rising of the sun to the setting of the same, the name of the Lord is to be praised.” To my surprise, Lucas responded with a short prayer of praise. My eyes moistened. This must be how parents feel when they see results of having done something right.

My homemade personal pizzas were a hit for supper. I wasn’t sure if Lucas was for real when he said it was his first homemade pizza. Turns out, he was. We took our pizzas outside and sat on the flatbed trailer. Fireflies began to dot the dusky evening and we made note of their flight patterns and colors.

After our piano lesson, I didn’t have to coax Lucas to bed. The bedtime story did that. I never heard a peep until the next morning when I felt fingers walking down my face.

A new breakfast scored another success. I’m on a roll. Then I looked out the window at the pouring rain. I refused to let it ruin our day. To the demonstration farm we swam. Interestingly, animals aren’t fond of the rain either. They huddled under the barn. I quickly discovered this was not nearly as exciting for Lucas as it was for me. Nonetheless, we strolled around the entire farm with our feeding pail followed by an overzealous goat wearing a “do not pet me” tag.

The rain wasn’t letting up as we got into the car. “Lucas,” I said, “what do you think about going hiking to the spillway?” I assured him we would get wet, but we wouldn’t care. He surprised me again. Floored me, really.

“We can dance in the rain!”

Lucas was a joy to watch as he sloshed through the mud puddles while singing unintelligible happy words. He floated down the trail with his arms outstretched to the delight of life. Look how carefree and relaxed he is. This child has no idea the serendipity he is raining into my life right now. God is using him to speak to me, and he has no idea.
“Let my teaching fall on you like rain, let my speech settle like dew. Let my words fall like rain on tender grass, like gentle showers on young plants” (Deuteronomy 32:2).